McNabb’s Inability To Defend The Jab 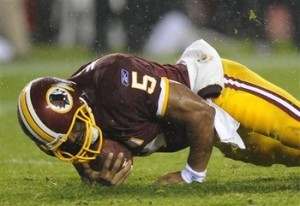 Donovan McNabb, down for the count!

Bernard Hopkins is ignorant, plain and simple.  He also is more than willing to express his ignorance whenever the media provides him an opportunity to do so.   Based on my observation, Hopkins does not behave ignorantly solely to promote his boxing career.  His win-loss record sufficiently speaks for and promotes itself.  Rather, Hopkins’ ignorance is the direct result of what most people would not hypothesize: a sheltered upbringing.  Bernard Hopkins (aka “the black rocky”) experienced the first nine years of his life as one of eight children in a household residing in Northern Philadelphia’s Raymond Rosen Project Complex.  By age 22, Hopkins had been stabbed three times, committed several muggings, and served five years in prison following his commission of nine felonies.  During his time in the penitentiary, Hopkins witnessed an inordinate amount of violence and thus acknowledges that his tumultuous childhood and young adulthood made him who he is today––a ruthless fighter, who has consistently performed at an extreme level of intensity, even at the ripe age of forty-six.

Considering that Hopkins experienced such an atypical childhood and early adulthood surrounded by violence, poverty, and fellow prisoners, I admire him for becoming who he is today—a successful lightweight and middle weight fighter with 52 wins (34 by knockout).   Most recently on May 21, 2011 (at age 46), Hopkins defeated 28 year old Jean Pascal to capture the WBC, IBO and The Ring Light Heavyweight belts, dethroning George Foreman as the oldest man to win a major title.  Hopkins is a husband.  He is a father.  Simply put, Hopkins has come a long way in his forty-six years on earth.

Nonetheless, on May 11, 2011, possibly as a way of promoting his upcoming fight with Pascal, Hopkins—a loyal Eagles fan—verbally lambasted former Philadelphia Eagles quarterback Donovan McNabb through a scathing rant to the Philadelphia Inquirer.  While acknowledging that McNabb had a privileged childhood, particularly in comparison to his own, Hopkins accused McNabb of not being “black enough or tough enough, at least compared with, say, himself, Michael Vick and Terrell Owens.”  Hopkins clarified to the Inquirer that “Vick and Owens remained true to their roots, McNabb did not.”   Hopkins further compared McNabb’s role with the Eagles as that of a house-slave who was spared from having to work in the field: “McNabb is the guy in the house, while everybody else is on the field.  He’s the one who got the extra coat.  The extra servings…  He thought he was one of them.”  With respect to McNabb’s prior comments on HBO’s “Real Sports with Bryant Gumbel,” where he stated it is tough being a black quarterback, Hopkins opined, “He goes on HBO and talks about [being] black.  He was right, but was the wrong messenger…  [he doesn’t] represent that.”  Finally, Hopkins criticized McNabb’s interaction with the Eagles’ front office, stating, “T.O. got [into] the boardroom and saw the way they talked to McNabb.  Come from where he [comes from] – that’s strange to some white people, when a black man speaks…  [W]hen T.O. walks in the boardroom with the Eagles suits, he’s like, what the heck? I aint used to this language.  I’m used to speaking up.”  See Marcus Hayes, Hopkins Still Thinking about McNabb, Philly.com, May 11, 2011.

Now, If based on the aforementioned statements you continue to question whether Bernard Hopkins is ignorant, I can share with you the number to a great therapist and sensitivity coach who would welcome you with open arms.  As a fellow African American, it is quite simple for me to wrap my hands around Hopkins’ rant, which was both ignorant and inaccurate.  In fact, Hopkins created a crystal clear characterization of what he considers an African American male in America to represent (the “Hopkins’ Traits”):

1)   Someone who is tough, primarily as a result of his experiences in the “streets”;

2)   Someone who doesn’t relish his interaction with corporate white America;

3)   Someone who is incapable of fully understanding or speaking the language of corporate white America; and

4)   Someone who is confrontational.

But, you know what?  I can’t blame Bernard Hopkins for his ignorance or for the statements that he made about Donovan McNabb.  It is not his fault that he’s made these inaccurate assumptions about the average African American male.  In the world that Hopkins grew up, an African American male represented, among other things, the four abovementioned traits.  Moreover, during the small amount of time that Hopkins has been a wealthy boxer, he likely has not encountered the necessary experiences to contradict these erroneous assumptions.  He has not been exposed to or met enough successful, professional African American males who make a living outside the realm of sports, entertainment, and crime.  He also likely has not been mentored by individuals who know that African American males are as professionally, fiscally, and socially diverse as any other race.  Hopkins’ perception clearly embodies what he has been exposed to.  As a result, I SLAM my enormous hammer of criticism on Donovan McNabb—the one person who you likely didn’t foresee me criticizing in this article.

In stark contrast to Bernard Hopkins, Donovan McNabb spent the first eight years of his life in a somewhat dicey part of the South Side of Chicago, before moving with his family at age eight to a smaller and more family oriented, blue-collar neighborhood in the southern Chicago suburb of Dolton.  The McNabbs were the first black family to join their neighborhood block, which came as  a shock to both the neighborhood and the McNabbs at the outset.  Nonetheless, both groups eventually adapted well to the newfound diversity.  Similarly, Donovan experienced a good family life.  His father, an electrical engineer, impressed upon his children the value of hard work, doing the right thing, and staying goal oriented.  Donovan’s mother, a nurse, was always there to listen and help her children work through life’s issues.

Donovan eventually attended and excelled in football and basketball at Chicago’s private, all male, Roman Catholic Mount Carmel High School.  With an annual tuition of $8,250, Mount Carmel prides itself for both its athletic and academic excellence and has been recognized as a Blue Ribbon and National Exemplary school.  Indeed, the school’s slogan boasts, “you came to Carmel as a boy.  If you care to struggle and work at it, you will leave as a man.”  As many of you know, prior to being drafted second by the Philadelphia Eagles in 1999, Donovan had an exceptional three-year football career as the quarterback for the Syracuse Orangemen.  What many of you probably do not know is that Donovan chose Syracuse over a number of other excellent football programs for its communications department (which is nationally ranked among the top 20).  He had future aspirations of being a sports broadcaster.

I take issue with Donovan McNabb in several respects.  First, Hopkins’ rant does not represent the first time that an individual has disparaged McNabb concerning his role as the quarterback of the Eagles and Donovan has not subsequently defended himself.  In September 2003—the year that the Eagles went 14-3 and lost to the Panthers in the NFC Championship game—Rush Limbaugh criticized the media and the National Football League for providing an overrated evaluation of McNabb as a quarterback:

“I don’t think he’s been that good from the get go.  I think what we’ve had here is a little social concern in the NFL.  I think the media has been very desirous that a black quarterback do well…  He got a lot of credit for the performance of this team that he really didn’t deserve.”

Similar to Hopkins’ rant, Rush’s statements regarding McNabb were racially driven.  And what did McNabb say in response to this statement?  Essentially, nothing:

“I know I played badly the first two games…  He said what he said…  I’m sure he’s not the only one that feels that way but it’s somewhat shocking to actually hear that on national TV…  An apology would do no good because he obviously thought about it before he said it.”

Hello?  Donovan, by 2003, you had completed only four seasons as the star quarterback for the Philadelphia Eagles, yet, you had passed for a total of 9,835 yards, thrown for a total of 71 touchdowns, rushed for a total of 1,884 yards, and run for a total of 14 touchdowns.  I think it’s fair to say Donovan had a reason and the justification to defend himself against Rush’s remarks.  Nonetheless, he took the criticism and remained quiet.  His career continued to flourish but it certainly left a blemish on his professional image.  It sent the message to both his fans and his critics that I’m passive, I’m soft, and I may be incapable of being a leader.

Fast-forward to May 2011, where Donovan once again failed to respond to Hopkins’ disparaging remarks regarding his role as an African American quarterback in the NFL.  Indeed, via his publicist, he refused to even issue a comment.  Now, I get it, Donovan.  You theorize that there’s no need to respond to such ignorant remarks because everyone knows that the substance of the statements are inaccurate and not worthy of your attention.  Got it.  However, McNabb actually is the perfect person in the perfect position to issue a response to these remarks.  He is a famous, professional African American (some might say, even a role model) who understands that African American males can excel in this Country while not representing the Hopkins’ Traits.  Essentially, McNabb was given the perfect platform to speak from and convey this point to me, you, and every African American child in the hood searching for inspiration.  However, he did not speak!

In sum, Donovan is a GREAT person, but he has consistently tarnished his image, not by behaving inappropriately, but by being so darn passive.  Moreover, from my vantage point as a 29-year-old African American male, he has failed as a leader and as a role model.  He certainly entered Mount Carmel “as a boy,” but sometimes he compels me to wonder whether he actually left “as a man.”  Should you wish to be a leader and a role model, my advice to you, Donovan—take it or leave it—is the following:

1)   Always issue a statement in response to criticism from your peers, even if it consists of a short and concise acknowledgement that “everyone is entitled to their own opinion but you beg to differ with respect to [fill in the blank].”  A simple responsive statement illustrates, among other things, that you are aware of what has been said, are strong enough to respond to your critics, but understand when it’s not worth bickering over trivial issues.  Note, a statement should be issued by you, not your agent.

2)   Be proactive.  Criticism should never be your sole basis for issuing public statements.  At the very least, compel your publicist to make statements regarding causes you support (e.g., the fight against diabetes).  Unfortunately, your professional image could use a little boost.