← Don’t Be A Weiner, Learn To Use Your Twitter
The NCAA Compliance Rules → 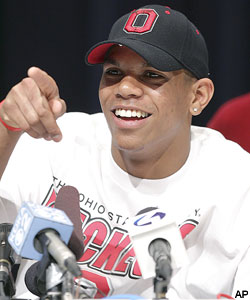 THIRDandFOUR would like to introduce the Sports World to our new baby Weekly Correction.  Consistent with our theme concerning critical decisions, image cultivation and the professional athlete, THIRDandFOUR now provides a weekly note that highlights an athlete who would have benefited by consulting our website prior to painfully stumbling before either the media, a professional team or college program, a professional league, an officiating crew, and/or similar individuals and entities.

For our inaugural Weekly Correction, I highlight Terrelle Pryor, the newly announced former football star for the Ohio State University.  For those of you who are not familiar with Terrelle (sometimes confused with Terrell—as in Owens—even by his newly hired agent Drew Rosenhaus), he led the Buckeye Nation as their quarterback for the last three years.  During this time period, he amassed quite the statistical “trifecta,” while improving upon his overall game and becoming a more balanced quarterback each year.[1]

As evidence of Pryor’s gifts as a football player, he is OSU’s all-time leading rusher among quarterbacks, and his career total of 57 touchdown passes ties a school record.  Further, last year, he ranked among the top ten of NCAA quarterbacks with respect to passing efficiency.  Tellingly, those who ranked ahead of him include Cam Newton of Auburn (the no. 1 pick of the 2011 NFL draft), Kellen Moore of Boise State (who is considered by many to be the no. 1 college football player entering the 2011 season), Andrew Luck of Stanford (who is easily the second ranked college football player entering the 2011 season), Andy Dalton of TCU (the no. 35 pick of the 2011 NFL draft), and Ryan Mallett of Arkansas (the no. 74 pick of the 2011 NFL draft).  Those that ranked below him certainly didn’t ride the pine in 2010.  These quarterbacks include Jake Locker of Washington (drafted no.  8 to the Titans), Blaine Gabbert of Missouri (drafted no. 10 to the Jags), and Christian Ponder of Florida State (drafted no. 12 to the Vikings).

Just prior to the 2011 college football bowl season, however, news reports surfaced that Pryor, along with several of his teammates, had accepted improper benefits, including cash and tattoos, in exchange for OSU paraphernalia that they had obtained for free from the University.  However, instead of preventing these players from playing in the upcoming Allstate Sugar Bowl, the NCAA suspended each player for the first five games of the 2011-12 season.[2]  Subsequently, the Buckeyes went on to beat Arkansas in the Sugar Bowl, 31-26, and over the next four months, Pryor consistently expressed his intentions of coming back to OSU for his senior season, notwithstanding the suspension awaiting him.

However, by May 30, 2011, reports concerning the severity of OSU’s infractions had grown worse than anyone could ever imagine.  Buckeye Coach Jim Tressel had acknowledged that he knew as early as April 2010 that his players had violated NCAA compliance rules, yet he didn’t disclose this information to the school and the NCAA—a clear breach of his coaching obligation and the NCAA compliance rules.  These facts along with mounting pressure from the University’s Administration ultimately compelled Tressel to resign on this date.  Soon thereafter, on June 7, 2011, Terrelle Pryor announced that he also was withdrawing from OSU.

As speculation concerning Pryor’s future increased following his June 7 announcement, Pryor hired Drew Rosenhaus—an NFL agent who is infamous for his brazen aggressiveness—and together, they conceivably planned the absolute farce that occurred on June 14, 2007.  Reminiscent of the scene from Sunset Boulevard when Norma Desmond pronounces, “all right, Mr. DeMille, I’m ready for my close-up,” Pryor’s and Rosenhaus’ press conference on June 14 did absolutely nothing to bolster or buoy Pryor’s image—or as most NFL teams refer to it, strengthen his character.

In a red polo, oddly resembling the color previously worn by Terrelle on football Saturdays, Pryor sat before the media and exclaimed:

“I say sorry to all the Buckeye nation and all the Buckeye fans across the country…  I never meant to hurt anybody directly or indirectly with my conduct off the field and I am truly sorry.”

As for his feelings towards his former coach and mentor Jim Tressel, Pryor opined:

“In terms of coach Jim Tressel, a special shoutout.  I’m sorry for what all went down and I apologize with all my heart.  I love you just like a father.  You taught me a lot and I apologize for putting you in a situation and taking you out of a job and place that you loved.”

And after 97 seconds of Terrelle pouring his “heart” out on the table, he was done.  Rosenhaus stepped in and wrapped up the press conference with a six-minute marketing presentation to the NFL.  As if he was selling a ketchup packet to a lady wearing white gloves, he boasted:

“[Terrelle] is very sad about what has happened to his college career and Ohio State…  I can tell you that he is extremely, he is responsible for the mistakes that he has made.  He has owned up to that.  There are no excuses here, guys.  No excuses at all.  But the past is now the past for him and we have to move ahead.  There is no point in him looking back.”

Rosenhaus further projected that Pryor will be a first-round pick in the supplemental NFL draft this summer, emphasizing that “Terrelle Pryor will be a great—not a good quarterback—a great quarterback in the National Football League…  He is going to be a star.  This experience that he has gone through will galvanize him and make him a better person, a stronger person.”

Finally, in true Rosenhaus fashion, he ended the press conference without fielding a single question from the media: “I think I’ve said it all…  So I’d like to thank everybody for coming.  Guys, we’re going to shut it down right now and I appreciate your time.  Thank you.”

I genuinely respected Pryor’s initial decision to remain at Ohio State for his senior season.  Every potential NFL quarterback (aka the “field general”) could use a few extra snaps before entering the pros.  In college, there’s no comparison to the fast-paced nature of the NFL game.  Further, despite his accolades and stats as a quarterback, Pryor was a future NFL wide receiver in the eyes of many sports commentators.  Moreover, notwithstanding his physical capabilities, Terrelle had also just displayed to the nation through his repeated violations of the NCAA compliance rules that he had not fully matured into a responsible adult and professional.

That being said, I can also understand Pryor’s rationale for finally deciding to leave OSU after (i) putting up great stats in the former season; (ii) losing his head coach and mentor; and (iii) learning that he would participate in, at most, 7-8 games during the 2011-12 season following his five game suspension.  Thus, I am in full support of Pryor “taking his talents to the NFL” (Sorry, I couldn’t resist).

My absolute disgust with Terrelle Pryor arises from his and Drew Rosenhaus’ version of a nationally televised “apology.”  Now, correct me if I’m wrong.  Maybe Pryor and Rosenhaus never intended for their June 14 press conference to constitute an apology to the Ohio State University and its fans.  I’m actually going to go out on a limb and assume that at least Rosenhaus primarily intended for it to be a tool to market Pryor to potential NFL employers.

Nonetheless, everything about that press conference irked the hell out of me from a total objective point of view.  As if I was their mother, I naturally wanted to grab Rosenhaus and Pryor by their left ears and scold them while pronouncing their full names.  I’ve finally come to the realization that I felt this intense emotion because the Ohio State University and their fans DO deserve a sincere apology from their quarterback as a result of his transgressions.  As the team’s former leader, he should apologize for pouring the program’s future scholarships and post-season play directly down the drain.  Moreover, I’m willing to bet my entire savings—yes, my entire savings—that the NFL teams that were fixated on the television when Pryor conducted his press conference were also hoping and expecting that Pryor would provide a sincere apology to the University and its fans.  From their perspective, an apology represents, among other things, that Pryor has matured from his prior mistakes and now has the strong character most NFL teams look for in a franchise quarterback.

In the future, should you find yourself in Terrelle Pryor’s shoes, here’s a bit of advice concerning press conferences in which you intend to or at least should apologize for your transgressions.  First, wear a suit, guys!  It’s really not that hard to throw on a suit and a tie as if you’re interviewing for a job.   In essence, Terrelle Pryor interviewed with each of the 32 NFL teams on June 14.  Second, prepare, prepare, prepare.  Here, both Pryor and Rosenhaus sounded like bumbling idiots.  If you don’t believe me, just re-read the above transcript and count the number of confusing statements made by both parties.  I lose count each time!  Coming from a litigator, it actually doesn’t appear unprofessional when you use note cards.  Third, apologize to those who are deserving of the apology.  On June 14, Terrelle Pryor primarily apologized to—sorry, gave a “special shoutout” to—his conspirator.  Remember, Tressel is ultimately just as guilty as Pryor in the eyes of the NCAA.  Fourth, hold the apologetic press conferences separate from the press conferences marketing your skills.  Similar to what occurred here, you risk overshadowing the intended apology with a marketing presentation.  Finally, don’t permit your newly hired, highly conflicted, and overly aggressive agent to run the show.  This was Terrelle Pryor’s debut to the World as a professional.  Contrary to what transpired, he should have spoken for 80 percent of the press conference, not his agent.

[1] In 2008, as a freshman, Pryor split time with senior Todd Boeckman before taking over the fulltime starting role as quarterback by midseason.

[2] I imagine that all kinds of questions are running through your head regarding the timing of the punishment received by the OSU players.  However, stay tuned next week for my lambasting of the NCAA for its inconsistent enforcement of the compliance rules, particularly in instances that are financially beneficial to the Association.

← Don’t Be A Weiner, Learn To Use Your Twitter
The NCAA Compliance Rules →