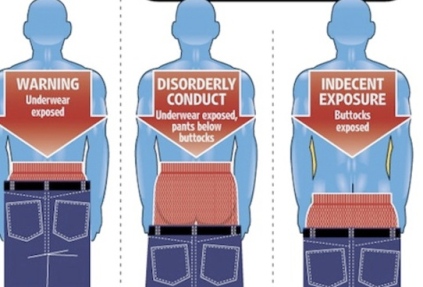 As promised, THIRDandFOUR will occasionally mix in pop culture to keep things fresh and exciting.  This week, we address the various dress code policies that have been implemented within the professional sports leagues.  Our focus concerns the manner in which certain professional athletes, e.g., Amar’e Stoudemire, have taken advantage of these restrictions to further their professional image and create new professional opportunities for themselves either away from the field or off of the court.

As an attorney, I have grown accustomed to regularly wearing either business casual attire or suits.  I’ve accepted that this attire—though uncomfortable at times—is necessary for co-workers, clients, and adversaries to perceive me as professional and as someone who takes his work seriously.  The key to enjoying such attire, however, is to have a little fun with it.  I accomplish this level of fun by wearing immaculately shined shoes, custom-fitted shirts, uniquely lined blazers, colorful pocket squares, and signature argyle socks.  Often, I stand out in a room full of people.  But who doesn’t like a little attention? It can be the deciding factor as to whether you get your dream job or meet your future wife.

For many professional athletes, loafers, wingtips, slacks, dress shirts, blazers, and ties are as foreign to them as a consistent golf swing is to me.  Understandably, these athletes consider this attire bizarre, when their typical daily attire throughout high school, college or the minors consisted of either athletic shorts, sweats, t-shirts, or hoodies.  In comparison to most young Americans, Individuals who strive to become professional athletes never partake in semester or summer-long internships that require a business attire “uniform.” They work on their game.  Thus, this conservative attire never becomes an integral part of their professional lives.

That being said, once professional athletes reach the “league,” most of them yearn to stand out and fully project themselves.  As entertainers, they are drawn to the spotlight and naturally crave attention.  Unlike me or someone else who maintains that 9 to 5…6…7…8…9…10…11 job, they are naturally less worried about what their teammates, their boss, or the opposing players think about their attire.  Generally, professional athletes are of the mindset that if their clothing or jewelry draws attention—any attention—to them, they have accomplished what they set out to achieve.  It’s natural for them to think this.  These material things display their personality, wealth, and level of success.  Moreover, some, but certainly not all, professional athletes believe that once they strip away the uniform and step off of either the field or the court, their bosses, the media, and the fans no longer judge them.  Thus, they aren’t required to present themselves in a manner that is considered professional by either the league, the media, or the fans.  These individuals are misguided.  Professional athletes—as entertainers—are under a spotlight 24 hours a day, 7 days a week.  To be successful, at all times, they must cater to the audience (i.e., white-collar fans) that roots for them, purchases expensive tickets to their games, buys ridiculously overpriced beers and hotdogs, and ultimately pays their salaries.  As a result, most professional sports leagues have recognized this principle and implemented some sort of off-the-court dress code policy that controls what players can wear while conducting league business.

For instance, the Commissioner of the National Football League—probably the most lenient of the big-four leagues when it concerns attire—retains jurisdiction over the players’ attire for ninety minutes after the end of games.  Thus, according to the Houston Chronicle, players are not permitted to conduct interviews while wearing clothing with visible logos of non-NFL licensed apparel.

According to the Communications Manager of the Major League Baseball Players Association, no MLB dress code exists.  However, individual clubs have the discretionary authority to compel players to abide by certain standards.  Many teams, such as the Yankees, have taken advantage of this authority.  The Yankees, for instance, prohibit all facial hair other than sideburns and mustaches.  Similarly, NFL teams maintain the discretion to instill a dress code, for instance, when traveling to and from the hotel or the stadium.

The National Hockey League is quite unique with respect to its dress code.  ESPN columnist Scott Burnside sums it up best: “hockey players have been told what to wear for years, long before they reach the NHL.  Most junior and minor-pro teams have some form of dress code covering what is and isn’t to be worn to games and around the rink.  Dress codes for minor hockey teams are also common and are seen as a way of fostering team unity and cohesion.”  According to Tampa Bay Lightning star Vincent Lecavalier, “everybody wears a suit.  We’re just used to it.”  Burnside also noted that although an unofficial dress code exists in hockey, Exhibit 14, Paragraph 5 of the collective bargaining agreement officially checks those players who have a tendency to venture offsides (pun intended).  It states: “[p]layers are required to wear jackets, ties and dress pants to all Club games and while traveling to and from such games unless otherwise specified by the Head Coach or General Manager.”

Over the past two decades, the National Basketball Association has been synonymous with hip-hop culture.  For instance, during the 1990’s, Shaquille O’Neal—now, the “Big AARP”—rapped his way through his entire career with the Orlando Magic and three seasons with the LA Lakers.  He produced such great hits, like “What’s Up Doc? (Can We Rock)” on his 1993 album Shaq Diesel; “Freaky Flow” on his 1994 album Shaq-Fu: Da Return; “Strait Playin” on his 1996 album You Can’t Stop the Reign; and “48 @ The Buzzer” on his 1998 album Respect.  And let’s not forget about his favorite Lakers’ teammate Kobe Bryant, who collaborated with model Tyra Banks to produce the hit song KOBE.

So during the 2005-06 season, when—to the surprise of most of their players—the NBA implemented a very strict dress code, the new restrictions created quite an uproar.  In a memo issued to NBA players on October 17, 2005, commissioner David Stern required players to wear “business casual” attire while engaging in “team or league business” (i.e., all activity conducted on behalf of the team or the league during which the player is seen by, or interacts with, fans, business partners, members of the public, the media, or other third parties).  During players’ attendance at games in which they are not playing, they must additionally wear a “sport coat” along with “dress shoes or boots, and socks.”

Following his review of the memo, then Phoenix Suns guard Raja Bell expressed his discontent regarding the new rules, stating in a quote to ESPN, “I understand they’re making it out to make us look better to corporate and big business.  But we don’t really sell to big business…  We sell to kids and people who are into the NBA hip-hop world.  They may be marketing to the wrong people with this.”

Wrong!  Try again, Raja.  As explained above, “corporate and big business” pay your bills.  David Stern understood this principle in 2005 and certainly wasn’t going to let something as simple as his players’ attire drive away the substantial amount of revenue obtained by the league through corporate America. 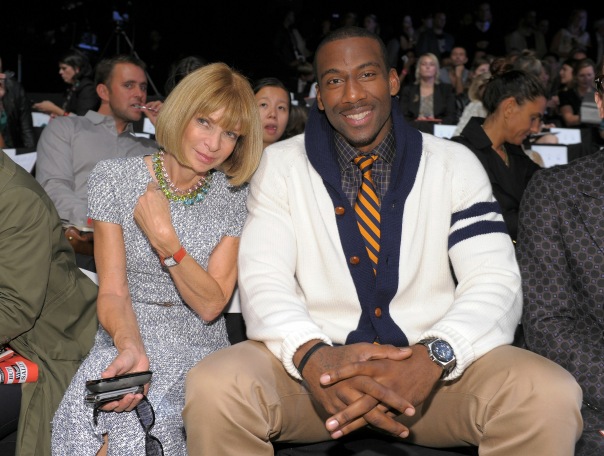 So when life gives you lemons, make lemonade.  Since the inception of the NBA dress code policy, the Knicks’ star power forward Amar’e Stoudemire (aka STAT – Standing Tall And Talented) has done just that.  In the illustrious words of Vogue’s editor-in-chief Anna Wintour, over a five-year period, Amar’e has become a fashion icon.  He has enlisted the help of stylist Rachel Johnson and 6’5″ tailor Waraire Boswell to conquer his 6’10” height–a fashion barrier for many.  While Lebron James and Dwayne Wade sit beside each other during post-game press-conferences dueling over whose windsor knot is larger, Amar’e consistently appears before the media solo, dressed confidently for success. 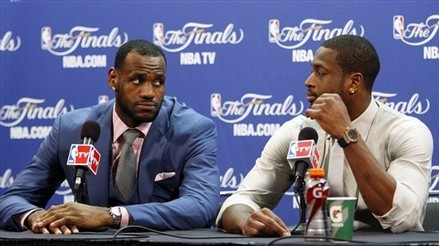 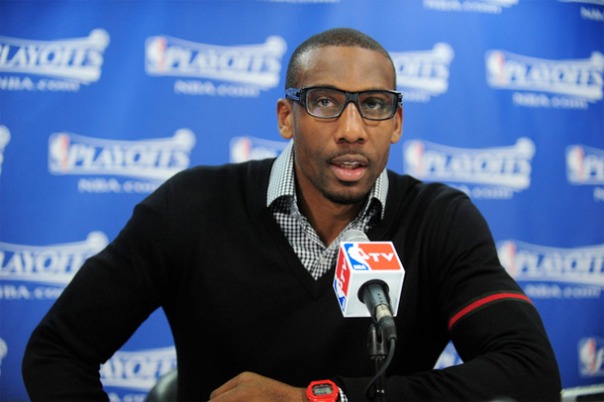 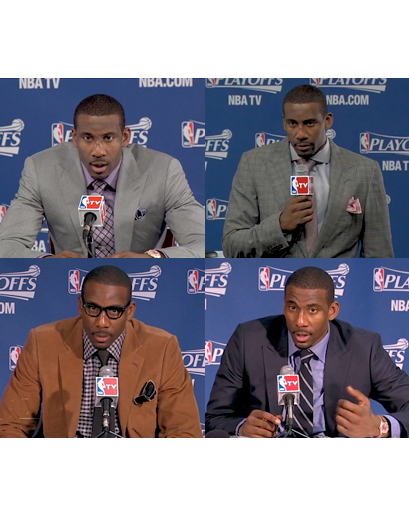 THIRDandFOUR applauds Amar’e Stoudemire.  He has taken the restrictions imposed upon him by the NBA and turned it into a love for fashion and a way to further himself professionally off of the court.  His new friend Anna Wintour has featured him on the cover of and within Vogue Magazine.  There, he is complimented for “his fashion instincts” that “are remarkably honed.”

Moreover, he has partnered with fashion designer Rachel Roy to design and release a women’s fashion line in fall 2011.  As for the rest of the NBA, many players should take notice: 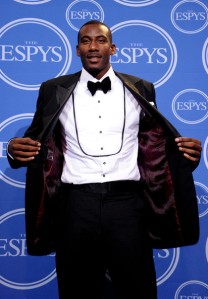 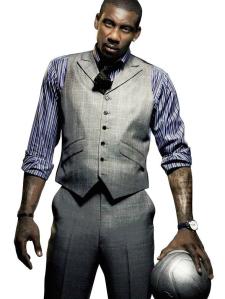 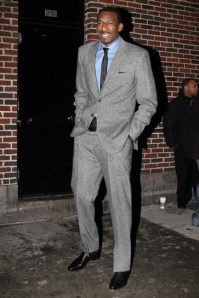 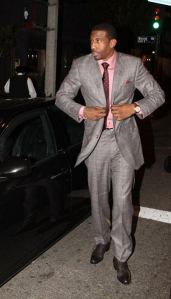