Directly following the Denver Broncos’ comeback win over the dreadful 0-7 Miami Dolphins on Sunday October 23rd, Broncos starting quarterback Tim Tebow, in signature fashion, kneeled in reflection while his other teammates wildly celebrated the improbable win.  Tebow—a second year NFL quarterback who has acquired a reputation for publicly displaying his Christian faith since starring as a Heisman “quarterback” for the Florida Gators—has also gained a reputation for having the lowest quarterback rating (QBR) in the NFL while maintaining a starting role at quarterback this year.

Is anyone shocked, though? Tebow is not, and never was, the stereotypical quarterback.  As a senior at Florida, he threw 21 touchdowns, yet rushed for almost the same number (14).  Florida fans grew to anticipate and love his quarterback sneaks into the end zone, where he rode piggyback on the shoulders of his fullback or offensive line, or personally bulldozed several linebackers as if they were crash test dummies.  Notwithstanding Tebow’s endless drive to excel and win, his former tactics clearly have not worked in the NFL.  NFL players are bigger and quicker, and as a quarterback, you can’t sit in the pocket for nine seconds without getting rid of the ball.  He has had flashes of brilliance this season mostly due to his pure athleticism, but they have been largely outweighed by his miserable decision making as the field general.

Surprisingly, conversation and criticism regarding Tebow’s poor play during his two starts as the Broncos quarterback this season have taken a backseat to banter regarding his signature kneel.  Indeed, following his ugly comeback win against the Dolphins on October 23rd, an immediate Internet craze baptized his kneel as “Tebowing.”  And since then, Detroit Lions linebacker Stephen Tulloch and tight end Tony Scheffler celebrated significant plays against the Broncos last Sunday by Tebowing.  Orlando Magic center Dwight Howard tweeted pictures of him Tebowing in a fast food restaurant.  Moreover, the media has butted heads as to whether such imitation amounts to either disrespect and mocking of Tebow’s faith or mere playful entertainment. 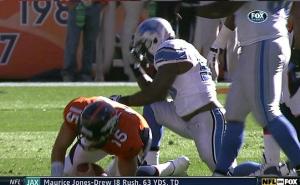 Personally, I haven’t quite decided who is right or wrong with respect to the issue.  Nonetheless, I can confidently state that if you are a professional athlete, the act of Tebowing opens you up to more negative criticism than praise, even when your intentions are playful and innocent.  How does it possibly promote your brand as a professional?  It doesn’t.  If anything, professional athletes who imitate the kneel risk coming off as absolute jerks who are insensitive towards other individuals’ faith and the ways in which they express it.  They further risk alienating themselves from the aforementioned fan base.

Accordingly, I’d like to highlight another figure in professional sports who is worthy of more than mere imitation: Oklahoma City star forward Kevin Durant.  This past Monday, October 31st, Durant—one of many NBA players who currently sits on the sidelines while Billy Hunter and the Player’s Association negotiates with the league and its owners regarding a new collective bargaining agreement—decided to engage his twitter followers by expressing his boredom and need to be active.  Soon thereafter, the following tweets were exchanged between Durant and Oklahoma State student George Overbey regarding a possible opportunity for Durant to join George’s Fraternity in a flag football game that night:

@KDTrey5: This lockout is really boring..anybody playing flag football in Okc..I need to run around or something!

@groverbey: Got a game tonight in Stillwater!! I need a deep threat!! RT @KDTrey5: This lockout is really boring..anybody playing flag football in Okc..

@KDTrey5: @groverbey can I play

@groverbey: Only if you bring your A game. Yes for real! Come up early and hangout, go over some plays RT @KDTrey5: @groverbey forreal?

Durant and George subsequently exchanged several private twitter messages and text messages, which led to Durant picking up George and several of his friends from their residence in his lavish—but very modest—van and driving them to the flag football game in Stillwater, Oklahoma.

On the football field, Durant further cemented his reputation as being both an elite athlete and a stand up guy.  Though the Oklahoma City Thunder could have likely voided his five-year $86 million contract extension due to kick-in this year had Durant sustained a serious injury on the field that night[1], he played the entire flag football game, recorded four touchdown passes on offense and three interceptions on defense.  He left the game in the same modest fashion by which he arrived, signing hundreds of autographs and interacting with just about every fan that reached out to him.

Most importantly, Durant left his fans with the sentiment that he doesn’t consider himself special or incapable of interacting with any of them on any given day.  Clearly, he’s just another one of the guys.  George Overbey summed it up best:

@groverbey: Had one of the best nights of my life tonight.. Game ball goes to @KDTrey5 . 4 tds and 3 picks! Thanks for coming up bro!

As a young professional, often your success directly correlates to the small decisions you make along your career path.  Thus far, Durant has figured “it” out, and has made all of the right decisions to propel his professional image off of the charts.  To all of you professional athletes who are attempting to brand yourself in a similar fashion, try “Duranting.”

[1] Most NBA Team-Player contracts establish that teams have the discretion to void players’ contracts where they engage in any activity that would subject them to more than a normal risk of injury.  For instance, in 2003, the Chicago Bulls waived the contract of second-year player Jay Williams following his involvement in a motorcycle accident that seriously injured him.  The team maintained that his contract was no longer legally enforceable and that it did not have to payout his remaining salary because he violated the contract by riding a motorcycle and injuring himself.  Williams, nonetheless, received a $3 million buyout from the Bulls as a parting gift.